A little over a week after I placed my order, my Nintendo Famicom controller to USB conversion board arrived from PCBWay!

Thank you for everything. PCBWay！

Because of the button pads, the board is gold plated. The gold-plated PCB is beautiful.

In the case of solder-finished PCBs, oxidation will cause poor contact with the buttons, and over time, the buttons will become less responsive. For this reason, this PCBs are gold-plated to prevent corrosion so that they can be used for a long time.

First, place PCBs of the same thickness around the target PCB.

For the solder paste, I used TS391LT50, a low melting point solder paste from CHIPQUIK. Since it starts melting at 138 degrees, it can be easily reflowed in a home oven. In addition, I have been using the TS391LT50 for a long time because the solder particles are finer than those of the Chinese solder paste sold in general, which allows me to print beautifully even on thin pads.

I use a used plastic card (I use a loyalty card from an electronic parts store) to print solder paste from top to bottom.

I printed 5 sheets and was able to print beautifully all the way through without cleaning the holes in the silk screen.

For mounting components, I use an electric vacuum pick HAKKO 394 instead of tweezers.

By changing the nozzle, it can pick and place both large-area ICs and small chip components, using the power of air to attract them.

This tool is absolutely recommended because it can mount components in dramatically less time than tweezers.

Nozzles for chip components can be purchased inexpensively here.

Since there were not that many parts, I was able to mount them smoothly.

I finished mounting all the PCBs in a short time.

The reflow is completed in about 10 minutes.

Reflow of the base is complete.

Attach the USB cable to this PCB. I used a wire stripper like the one in the picture to strip the sheathing off the USB cable.

Regardless of the thickness of the wire, you can peel off the coating by simply grasping the handle. It is not suitable for sheathing thin wires, but it is a very useful tool for sheathing thick wires, such as a USB cable with multiple wires.

The cable is soldered to the PCB.

As it is, no program has been written to the microcontroller, so write the Pro Micro bootloader for the Arduino.

Since it is not possible to install a connector for writing on the board, I inserted a test pin into the female connector of AVRISP and made contact with it with the test pin as shown in the picture.

This pin is plugged into the AVR ISP connector with an R75-3W receptacle pull.

Once the boatloader is written, the PCB will work as an Arduino Pro Micor. The next step is to write the gamepad program in the Arduino IDE.

The program can be downloaded from kc_fcpad1. This is a simple program that is a slight rewrite of the sample program.

Once the Arduino program is written, it will work as a gamepad. The Nintendo Famicom controller USB kit PCB is now complete.

Remove the PCB that is originally in this.

Place the completed PCB inside. The shape and the position of the holes were perfect. 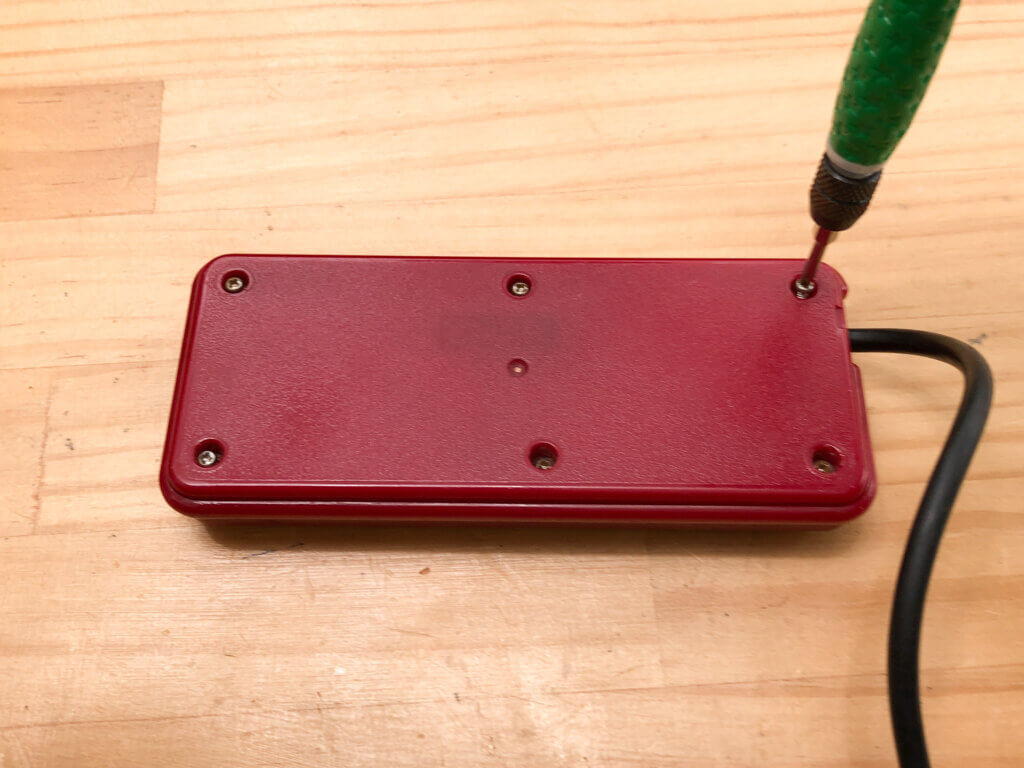 Close and screw down the back cover.

I'm playing with a Mac console emulator, OpenEmu. In the controller settings screen, I will configure the buttons.

Oh, wow, wow, wow! I can enjoy an Famicom emulator with an Famicom controller. This is impressive. I feel something nostalgic. This is fun.

How to clone kazzo for Nintendo Famicom (2019 and later models)

This is a device for using "Nintendo Famicom "cassette data on a personal computer. I will explain how to make a Kazzo...

I used ESP32 and did a basic experiment to see if I could turn on and off the light and adjust the brightness by giv...

"Solder paste printing" using thumbtacks to align the stencils is extremely useful because it doesn't slip out completely.

I previously designed an evaluation board and a stencil for a MAX 10 FPGA with many IO pins and ordered them to the ...

I bought the 858D hot air gun, which can easily remove multi-pin devices that cannot be removed by a soldering iron.

Hot Air Gun The 858D is a hot air gun with a thinner tip than a heat gun and temperature control. AliExpress.com P...

Sending measurement data to Ambient to check the stability of strain gauge "scales".

I would like to leave the "scale" I made the other day outdoors for a few days to check the fluctuations in the read...
Sponsored links
Sending measurement data to Ambient to check the stability of strain gauge "scales".
Designed a power supply circuit to operate the ESP32 with two batteries (actually, I did not design it)

Eliminate The noise mixed in with the HX711 readings
Make a flat light emitting lighting by processing acrylic into a light guide plate with a laser cutter
Install Chinese USB Blaster drivers to windows 10
Until the K155ID1 is controlled by the ESP 32 and the 2 digit Nixie tube IN - 12B is dynamically lit.
Making an electronic paper experimental PCB on which ESP32-WROVER and MAX V CPLD are mounted.
Using PCF2129, a real-time clock IC, with ESP32
Buy Tescom Low Temperature Convection Oven TSF601 for Reflow! A Nice Temperature Profile!